Which brings us to the Weego Jump Starter 22. At a $99 retail ($79ish street price), it packs a whole lot into a small and inexpensive package. Let’s start with the OTHER features. It has a built in 250 lumen LED flashlight, which might seem a little silly as it’s pretty weird to carry a flashlight around that’s the size of a small paperback, but is in fact brilliant (pun intended). When you’re trying to charge your car in the dark, you can use the Weego to get everything set up, then plug the cables in and start it. Or, as happened to one of us, when a headlight bulb popped one evening early in a long, dark drive, the Weego became a handy light to help replace it. Let’s face it, it’s never a bad thing to have an extra flashlight around, and it’s nice to know that one little bag can solve a lot of problems. 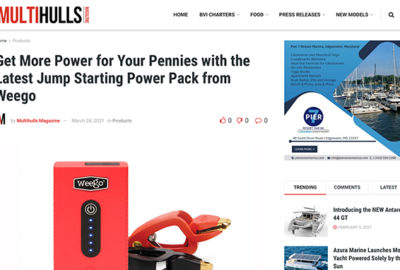