During the first week of January thousands of innovative companies gathered in Las Vegas to showcase the latest and greatest tech inventions during the 2015 Consumer Electronics Show (CES). This internationally renowned trade show is the largest and most prominent of its kind. Among Intel, Audi and other notable names stood small start-ups showcasing their products & brand for the first time – including Weego!

As Patrick Swayze might say, “Nobody puts Weego in a corner.” –  However, CES felt differently. Tucked in a far corner of the North Hall stood our scenic booth featuring our 1965 Ford Falcon, The Weego Wagon. At first the location was concerning, but within a few short minutes of the CES opening, the Weego team was swarmed with interested onlookers.

Many had never seen a product quite like this, and most couldn’t believe it – “THAT small thing will jump my car??” Those who had seen this type of product before were still drawn to Weego in particular – with our variety of products and sizes, family-founded beginnings and very unique branding, Weego stood out in the endless sea of techie. We got a lot of great attention from the press, and had hundreds of conversations with some great people from all over the world

All in all, Weego was a hit at CES 2015 and enjoyed  Las Vegas (a little too much at times). We look forward to the next big show  in February – The Miami Boat Show! 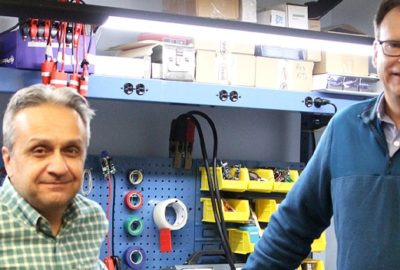 Weego at the American Towman Exposition

Meet Berdj Mazmanian, Weego Consumer Product Manager and Bob Kunz, Weego Sales Rep in Booth# 766 at the American Towman’s Exposition in Atlantic Convention Center, Atlantic, NJ – Thursday. Dec. 5th to Saturday, Dec. 7th. Learn about our full line of portable jump starters that have revolutionized jump starting for professionals and more! Our jump starters advanced battery power and technology gets you equal power to its lead-acid counterparts, but at a fraction of the weight and size. Weego’s easy to use design allows you to start your car, truck, boat, ATV and more – all in a matter of seconds, and all on your own. After a lot of time, hard work, and grit, Weego has unveiled our newest and most innovative Jump Starter, the Jump Starter 44! With the successful launch and tenure of our original series, we learned a TON about what people need and want from their jump starters. In addition, we’re always trying to make our products simple and safe for our customers – jump starting shouldn’t have to be rocket science, and it shouldn’t put you in danger, either.